Only 1 left in stock

This double length DVD features Richard Turner performing and teaching card techniques and routines. It also features a biography, a 2010 Magic Castle performance, highlights from his lectures which feature false deals and gambling moves, a visit to the home of Richard Garriott, a wedding video with Dai Vernon, and much more.

The highlight is without a doubt a section narrated by Bruce Samboy titled “Dueling Card Sharks” and “The Cardmen’s Get Together” where you see such gaming legends like Steve Forte and Ron Conley joined by Paul Wilson, Jason England, Michael Weber, and many others as they casually show each other card stuff and kid around. 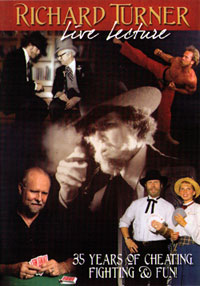